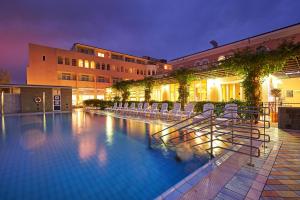 The first fortified settlement that gave shape to life in the village, was built in the 11th century. The oldest written document about the stronghold of Duino is dated 1139, the period which began with the condominium of the Tybein De Dewino, vassals of the Patriarchs of Aquileia; the fiefdom at that time was called Tybein.
The fiefdom was able to fend of attacks thanks to the high walls and battlements which enabled the observation of any hostile ships arriving. The fortress was accessible by a single, steep and fortified path along the battlement. The tower was constructed on different levels. From the recovered remains such as a desk set in the wall near an oval window and the frescoes on the bottom floor, it is supposed that this was a chapel whilst those above were used as a prison. The entrance to the fortress today is where there was a drawbridge. Beneath the ruins we can glimpse a rock overlooking the sea that looks like a petrified woman wrapped in a cloak, the famous White Lady. According to one legend, a noble lady – chatelaine Esterina da Portole, was thrown from the cliff at the time by her jealous husband. Every night the lady leaves the rock face and wanders around the castle, seeking in vain the cradle with her baby; every dawn she returns, petrified, to the face of the cliff. Between the two castles at high tide, one may see a rock, cut off by the sea; this is Dante's Rock.
The Patriarch Cassano della Torre (1316-1318) has crowned Arrigo king of Italy in 1311, when he had been Bishop of Milan. The ceremony took place in the basilica of Aquileia and in addition to the successor of the Patriarch – Pagano della Torre, Dante Alighieri was present, as ambassador of Cangrande della Scala. It seems that Dante was hosted on that occasion in the fiefdom of Duino by Pagano della Torre, before was nominated as Patriarch (1319-1332). The history of the castle and of the lords of Duino in this period is intermingled with Aquileia and the Torriani Patriarchs. The family reached the zenith of power with Ugone V (1344-1391) who submitted to the Dukes of Austria and received the Regency of Trieste. The lord of Duino had the new castle built on the ruins of the pre-existing Roman Tower. The Duino family history is interwoven with the Walsee family with the marriage of Ugone VI to Anna Walsee in 1389 and that marks the building of the new castle according to the wishes of Ugone, the last representative of the dynasty of Duino.
Walsee had the castle until 1472 and then for more than a century from 1472 to 1586 the castle was held by the Serene House of Austria, represented by the supervisors and captains, amongst these, the Hofers. In 1478 the ancient fortress was attacked during a Turkish raid and was finally abandoned for the New Castle.

Old Duino Castle from near

Street to the Old Duino Castle

Entrance to the castle area

Tickets control - must buy inside the New Duino Castle

View of the New and Old Duino Castle

Path inside the Old Duino Castle

View of the New Duino Castle

Entrance the Old Castle of Duino

Ruins of the Old Duino Castle

View to the sea

Observation point on the sea

The Gulf of Trieste

Sea below the Old Duino Castle 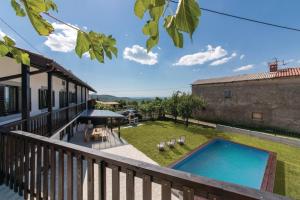 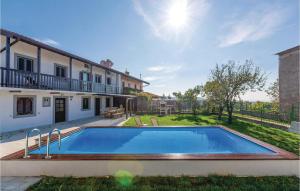 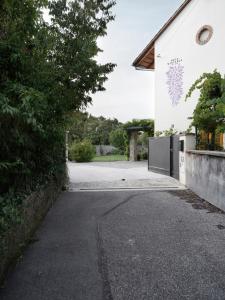