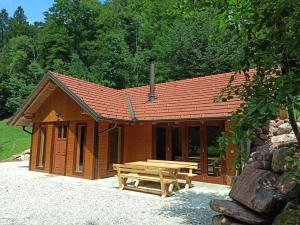 Borovnica is a village which lies on the border of the Ljubljana swamp. The Borovnica Commune is situated on the region where they meet different landscapes. Behind the village Borovnica is beginning the Karst land. Borovnica is a starting point for wonderful trips to the Pekel gorge and to Rakitna. In former times the village was known by viaduct and railway line Dunaj – Trieste, which was the largest viaduct built of stone in Europe and technical achievement of the 19th century. Borovnica viaduct was built from the year 1850 to 1856. It was made without cement. The viaduct is 38 metres high and 561 metres long. Today reminds of it only the 21. column, which is situated in the middle of the village. In the year 1992 was proclaimed for the technical monument. In Borovnica are the largest plantations of the American bilberries in Slovenia. In other half of the July they organize The day of bilberries. In the village you can see the Primary School Ivan Korosec, the Parish church of St. Margaret, the restaurant Godec, the churchyard, the bus and railway station, the library Borovnica, the administrative unit and municipality Borovnica, the monument of the war victims, the monument dedicated to the killed in First World War, the sport ground, the post office, the Dolina or Jelen bridge, the TVD Partizan Borovnica, the birth house of Marja Borsnik, literary historian and other. Jelen or Dolina bridge was built in the year 1857. It belongs to the oldest Slovenian bridges with double track line. It is 29 metres high and 219 metres long. The Church of St. Margaret was first mentioned in the year 1351. It is not known when the primary church was made, but they estimate that it was about in the year 1300. The Saint Margaret was the patron of the peasants. Its beginning should be connected with the construction of the Carthusian monastery Bistra. The church was many times renovated, at last in the year 1935 in the new classicism style.

Crossing before entering into Borovnica

Model of the former Borovnica viaduct

View of the 21th column of Borovnica viaduct

Churchyard at Parish church of St. Margaret in Borovnica

Monument dedicated to the killed in First World War

Monument of the war victims

Dolina or Jelen bridge near Borovnica