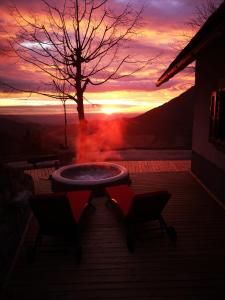 Col is a small village belonging to the Municipality of Ajdovscina. The largest local landmarks are the Saint Leonard's Church and the monument of the waterworks Gora. Part of the settlement above the church is Hrastova gorica, and part below the road to the school towards Visnje is Oresje.
Oresje represents the oldest part of Col and is probably named after walnuts. Hrastova gorica (Oak Hill) is named after the oaks that once flourished there. Landmarks in and around the settlement include a spring in Oresje with a reservoir, a former saw mill, a Tratnik inn, a cooperative home, an Alpine establishment, Primary School Col, fountain near the primary school, a snow cave in Malo polje, a two-year-old vine fragrance in Oresje, Lipov gaj sports center, Podvelb Castle, Trilek Castle, cable car and warehouse of the Austro-Hungarian army, Austrian fortifications of the First World War and the trough in Grahovnik. The village was created on the transport link that led from Aquile (today Oglej) to Emona (today Ljubljana). Cole's important role in the defense system is indicated by the fortifications at Stranci, Rizenberk and Sturmanik. They represented a fortified line of defense that was supposed to protect the Roman Empire from the invasion of barbarian tribes. They were made of untreated stone and without mortar (drywall). Even in the famous battle of the cold river, Col represented her immediate hinterland. A mention of Cole is made in the ruler on October 4, 1345. In the Middle Ages, Baron Flaschenfeld commanded Cole to erect a castle. It was built in such a way that it crossed the road and enabled a complete roadblock to Hrusica. It was after this vault that the village was initially called Podvelb. The vault was demolished in 1840. The present name Col is reminiscent of the collection of the provincial tax on goods of colnina (customs), which were transported here towards Idrija and Logatec. Before coming from Ajdovscina to Col, there are collapsing walls of the old Trilek Castle and its well-preserved tower on the right side of the road. The castle was owned by the Counts of Trilek, and then by the Abramsberg nobles, who were from Sturije.
They owned the mansion until the last occupants of the castle died. Since then, however, it has been declining irresistibly. In the last century, a Roman mile stone, dedicated to Julius the Apostate, was found in the garden of Trilek Castle, made of gray local limestone.

Road in the direction of Vipava Valley (Vipava, Ajdovscina)

Road in the direction of Crni Vrh, Godovic, Idrija

Col with the neighbourhood - Sights

Monument to the waterworks Gora 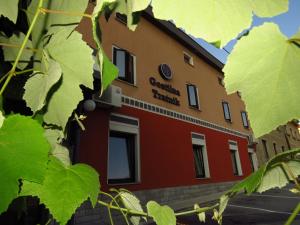 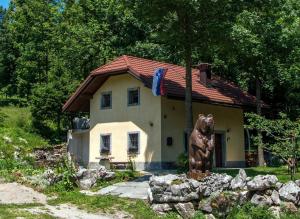