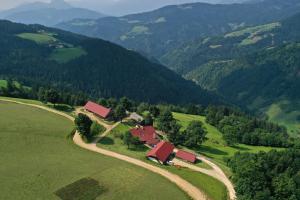 Crna na Koroskem and its surroundings have many cultural and natural sights that attract many domestic and foreign visitors. Among them, the most famous are the settlement of Crna na Koroskem, the church of Saint Oswald, the 2,000-meter high mountain Peca and the Crna Mining Museum.
Crna lies in a narrow basin along Bistra, Meza and Javorski potok, under the steep cliffs of Peca and the slopes of the Smrekovo mountain range. It is a crossroads of important roads towards Sostanj, Solcava and Mezica. The place was first mentioned in written sources in 1137. Iron and mining contributed to the development of the settlement into a market center. The ironworks was abandoned in 1892 because the owners switched to the ironworks in Ravne. Today, the Peca Underground mine and museum in Mezica are reminiscent of mining times. In the center of the village you can see an interesting permanent ethnological collection, a mining museum, the church of Saint Oswald, Forma viva - a cast, full-plastic ball, a stuffed bear, a monument to the National Liberation War from 1952, designed by the greatest Slovenian architect Joze Plecnik and other.
The parish church of Saint Oswald is dedicated to Saint Oswald, the patron saint of livestock, reapers and against the plague. It is an example of neo-Romanesque architecture, it got its present appearance in 1885, when it was restored after the fire and then consecrated. Mining Museum Crna - an open-air museum and an interesting ethnological collection Crna are located in the center of the settlement. The Mining Museum was erected in a rock in the middle of the square in 1980. The mining machinery is freely accessible at the former mine tunnel at Javorski potok. We can see a wagon for workers, a trolley for ore, a wagon for ore, bathing accessories and more. With a train similar to the one we see here, we can ride to the mine in Mezica. The ethnological collection is located in the premises of the former post office.
The collection includes exhibits from the 19th and the first half of the 20th century, which testify to the work, cultural life and life of the inhabitants of Crna and the surrounding farms. The collection was first erected in 1978, and the municipality acquired it from the collector Miro Prodnik. Among the natural sights, the linden tree stands out, Bozic waterfall, Rezman waterfall, Helenski potok, Peca, which is the most eastern 2,000-meter mountain in Slovenia, the image of King Matjaz in the wall of Peca, Velika Raduha, the extinct volcano Smrekovec and the Bistra valley. Najevska lipa (lime) grows next to Najevnik's homestead on Ludranski vrh above Crna na Koroskem and is the thickest tree in Slovenia. Bozic waterfall is easily accessible and the trip is suitable for everyone. Rezman waterfall is one of the most beautiful in Carinthia.
Peca is the most eastern 2,000-meter high mountain in Slovenia. The extensive mountain is bounded on the south by the valleys of Meza and Topla, and on the north it rises above Podjuna. The highest peak is Kordez's head and lies in the southern part. It is plateau-like, overgrown mostly with low dwarf pine and grass. In the immediate vicinity of the mountain lodge on Mala Peca is the famous cave of King Matjaz. A statue of the legendary King Matjaz, who was a rich king and fought with the Turks, stands in a partially artificially carved tunnel with a cave. A special feature of the Bistra valley, along which the Bistra stream flows, are the Carinthian beehives, which have been preserved to the greatest extent in this area. The slopes of the valley are wooded and steep, the farmhouses are mostly at the bottom of the valley.
Smrekovec is the only volcanic mountain range in Slovenia. Velika Raduha is the highest peak of Raduha, which rises steeply from Robanov kot. Govca, which is the highest peak of the Olseva mountain range, offers a very beautiful view towards Raduha and the neighboring Peca. 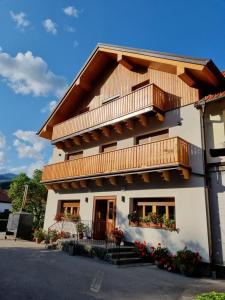 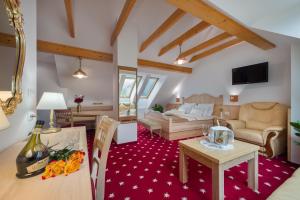 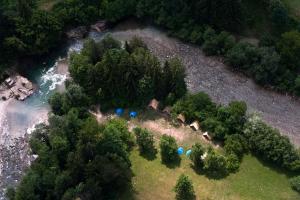 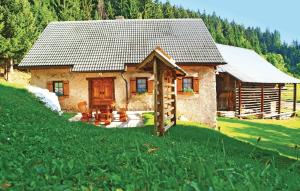