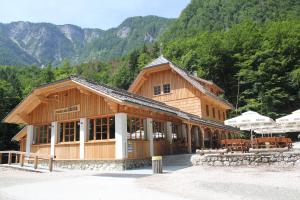 Dom na Komni Mountain Hut (1520 metres) is situated in the eastern edge of plateau Komna, which is sweeping steeply into the Bohinj valley. You can expect for about 2 hours and 15 minutes walking. The best way is that we leave the car in the parking place by Home Savica. The signpost leads us ahead to the road. In the right side we will see log cabin, which is a starting-point for the visit of Savica Waterfall. The way goes roundabout in the forest, which cools us in the summer time. Between that we rarely see the places with a good view of the Bohinj lake. At the end of the path is becoming more and more rocky. The mountain hut was built in the year 1936 and several times renovated and modernized. There also leads telpher line. This place is one of the most visited, because it stands in the waypost of bigger mountain paths. It is supplied all the year and it is managed from Ljubljana-Matica. It has a place with outside terrace, which offers wonderful views to the lake in the valley. Only 15 minutes is from this hut to the hut under Bogatin.

Start of path to the Komna

Path to the Komna

Counting of bends so hiking is easier

View of Komarca from path to Komna

Bending path to the Komna

Path to the Komna

Cave on the path to the Komna

Table with starting-points for other places from Dom na Komni Mountain...

View of Komarca from path to Komna

View of trees from path

Monument to the Fallen Partisans-Mountaineer
(~15.1 km) 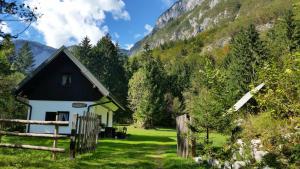