Brda is a picturesque landscape, marked by the extraordinary position between the state border and the valley of the emerald river Soca. The villages between the terraced landscaped vineyards and orchards along the slopes and ridge hills show the typical Mediterranean culture.
Brda is an old settlement area, many traces have left the Roman era. Slovenian settlement reached the edge of the plain and has not changed over the centuries. The local people preserved the Slovenian habits and mixed them with the Friulians for a while, although the border between the Austrian lands and the Republic of Venice ran across the area until the end of the 18th century. The border caused the construction of forts and castles, but also turned them into a scene of war. Due to overcrowding, the inhabitants emigrated to neighboring cities, under the occupation of Italy abroad and, after 1945, to the coast of Koper and Slovenian cities. The most important activities are viticulture and the cultivation of peaches and cherries. Gonjace is a small village located near Kojsko. Kojsko was the economic and cultural center of Brdo before the First World War. The castle of Kojsko from 1594 was the property of the Coronini counts, later the Earl of Attems. The Church of the Holy Cross dating from about 1500 is part of the former camp complex. It is decorated with frescoes from the 17th century, and the large altar from 1515 represents the highest quality preserved late Gothic wing altar in Slovenia. At the top of the nearby Mejnik hill, which stands above the village of Gonjace, stands a monument to the victims of Second World War and a 23-meter-tall 144-foot lookout tower, built in 1961. The monument is the work of academic sculptor and painter Janez Boljka from 1955. Verses on bronze plaque were written by writer France Bevk.
The view tower offers beautiful views of the Brda, Carnian and Julian Alps, Friuli, Dolomites, Karst, Gulf of Trieste, Trnovo Forest and Vipava Valley in clear weather. The plans to erect the tower are the work of architect Markot Schlajmer.

Parking area at the lookout tower on Gonjace

Monument to the victims of the Second World War 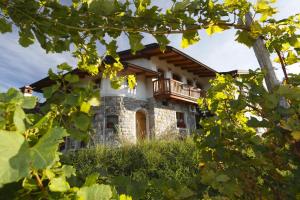 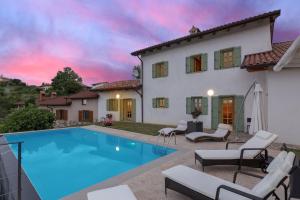 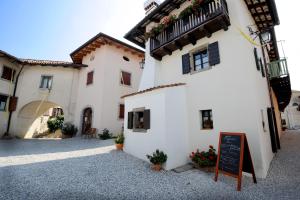