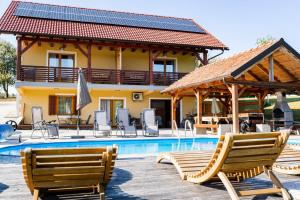 Most Beautiful Trips - Semic and Metlika with neighbourhood

The Gradac Castle is situated in the village Gradac in the Community Metlika in Bela krajina. The castle stands in the good protected area of the river Lahinja. There is a footpath to the Gradac Castle, which secedes from the main road next to the store. We come to the castle over the wooden bridge, which goes across the former defensive dyke. In the sources was the castle first mentioned in the year 1326 as Gräcz. At the beginning the Gradac Castle was probably the stronghold against the Turks. It was in the property of the Italian family counts Thurn-Valsassin, until it came in the possession of the family Burgstall, which were also the owners of the Krupa and Pobrezje Castles. The next owner was Jurij Gusic, who marked the castle with reconstructions. His tomb is situated in the castle park. He died in the year 1831. In the gable of the castle porch we can see the coat-of-arms of the family Gusic. The castle was in the year 1846 bought by Franz knight Friedau. He built in Gradac in the year 1858 foundry for iron with smelting furnace and supplied it with copper ore, which was digged out in Bela krajina. The last of the owners of the Gradac Castle was before the second world war wholesaler Sutej from Zagreb in Croatia. In the castle was between the war transitional partisan hospital, in the years from the 1944 to 1945 was alsto the officer school. After the war there was the school for hard educable children. Afterwards there was the agricultural and domestic school. However, after the year 1956 there were apartments. The Gradac Castle had a park with garden and avenue planted with plane and pine trees, but it is cut down now. The park belongs to the garden architectural heritage.

Bridge over moat in front of main entrance

View back on the road that leads in the castle

Outside part of castle above Lahinja River

Apartments at the end of castle

View of rapids of Lahinja River 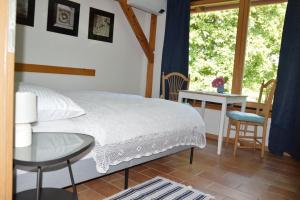