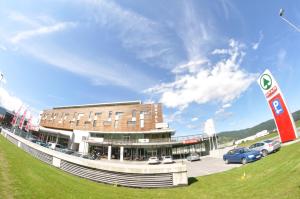 Source: Public information of Slovenia,
The Surveying and Mapping Authority of the Republic of Slovenia,
State map in measure 1 : 1.000.000, 1995
www.gu.gov.si
The Carinthia - Savinja area is known for its many natural and cultural sights. The Savinja region could also be called the former land of the Counts of Celje and is very geographically diverse.
It covers mostly forest-covered and tourist-interesting Alpine world of the Upper Savinja Valley, as well as parts of the Kamnik-Savinja Alps, the Velenje Basin, the Kozjansko Hills and the fertile Lower Savinja Valley, characterized by favorable conditions for hop production.
Carinthia extends along the Austrian border. Its image is created by wooded hills and mountains, which are Karavanke, Pohorje, Kamnik-Savinja Alps and the three river valleys, which are the Meziska, Dravska and Mislinja valleys.
Carinthia is difficult to reach and poorly connected to the center of Slovenia. The environment has been characterized by heavy industry in the past, especially in the Meziska Valley, which is the most economically developed. The center of Carinthia is Ravne na Koroskem.
Interesting places in the Carinthia - Savinja area are Celje, Crna na Koroskem, Dravograd, Lasko, Ravne na Koroskem, Podcetrtek, Vransko, Radlje ob Dravi, Rogaska Slatina, Rogatec, Sentjur, Slovenj Gradec, Slovenske Konjice, Smarje pri Jelsah, Sostanj, Velenje, Vuzenica, Muta, Zalec, Zrece, Vitanje and others.
Celje is located at the confluence of the Savinja and Voglajna River in the Celje basin. In terms of economic importance and size, it is the third Slovenian city. It is the commercial, economic, educational, transport, cultural, health and religious center of the Lower Savinja Valley with its outskirts. The medieval settlement developed on the remains of ancient Celeia.
Only 10 km south of Celje in the Savinja Valley lies Lasko. Lasko is a city with a rich cultural and historical heritage, natural beauties and a lively and varied cultural, sports and tourist pulse. The cultural and historical sights are the church of Saint Martin, Tabor Castle and Smihel. The most famous place is the Lasko brewery.
Ravne na Koroskem lie in the vibrant landscape of the lower Mezica valley, squeezed into a wide basin surrounded by rich forests, and on the south side stands in the background Urslja gora. This is the most populated part of Carinthia, where the town of Ravne already contacts the neighboring Prevalje.
Today, Ravne na Koroskem is the largest Carinthian city. It is the administrative, economic, educational, sporting and cultural center of the Mezica Valley, and in many respects exceeds the borders of Carinthia.
Rogaska Slatina is one of the oldest tourist destinations. The mineral water springs, which are Styria, Donat and Tempel, were mentioned in the Middle Ages. In addition to spa tourism and springs, Rogaska Slatina is also known for its glassmaking, which is famous for its beautiful products made of smooth and ground glass.
Svetina is a picturesque village belonging to the Municipality of Store. It is known that, according to the Tourist Association of Slovenia, it has twice been proclaimed the most beautiful mountain village in Slovenia. Slovenj Gradec is the cultural, economic and administrative center of the Mislinja Valley.
Zice Carthusian Monastery is located in the valley of Saint John the Baptist, near the village of Zice, in the Slovenske Konjice municipality. Zice Carthusian Monastery was a Carthusian monastery. Today is a cultural and historical landmark. At the entrance to the monastery there is Gastuz, which is the oldest inn in Slovenia, since it has existed since 1467.
The Logar Valley is located in the center of the Savinja Alps and is considered one of the most beautiful glacial valleys in Europe. Natural sights in the valley are Rinka Waterfall, Palenk Waterfall, Rastovski Waterfall, Logar's linden tree, Plesnik's Elm, Okreselj, Crna spring, which is the second spring of Savinja River and others.
The Logar Valley is the starting point for numerous hiking trips to the peaks of the Savinja Alps. Because of the many natural beauties, Logar Valley was declared a landscape park in 1987.
Velenje is the administrative, political, economic and cultural center of the Salek Valley. The valley is also called the valley of castles. In Velenje, lakes were formed due to the mining of the coal. They are called the Salek Lakes. Velenje Castle is one of the most beautifully preserved castles in Slovenia. It lies on a steep cliff above Velenje.
The Huda Luknja Cave is one of the largest natural attractions in the Carinthia - Salek region. It was one of the first Slovenian caves open to tourists. The locals arranged it for viewing already in 1895. Today, its entrance is accessible to all, and the Medvedji rov tunnel is on display accompanied by cavemen.
Muta is a small settlement with two cores, Upper and Lower Muta. At the turning from the main road to Spodnja Muta is located a picturesque rotunda of Saint John the Baptist from the 13th century, which is one of the oldest cultural monuments in Slovenia.
The Rotunda of Saint John the Baptist is located on the Lower Muta River at the mouth of the Bistrica River into the Drava River. It is one of the oldest churches in Slovenia. It was consecrated in 1052.
Rogla is located on Pohorje, about 15 km from the settlement Zrece, which is known mainly for the Zrece Thermal Spa. Rogla is a natural climate health resort and recreation center. For lovers of hiking, there are the Lovrenc Lakes, Klopni vrh, Lookout Tower, Osankarica, Sumik and more. They also have marked cycle routes.

Calvary (The Way of the Cross)

Ravne Castle (Streteben) with the park

The church of St. George

Stari trg and the church of St. Pankrat

Church of Saint Nicholas with rectory

Rotunda of Saint John the Baptist 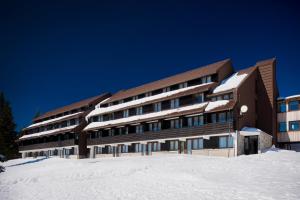 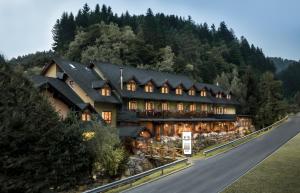 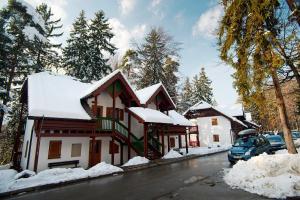 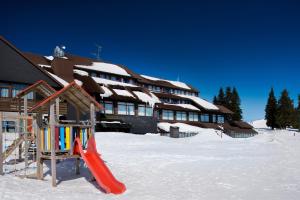