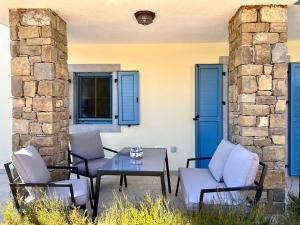 Kostabona is a clustered and densely populated village on the narrow protrusion on the southern edge of the ridge above the Dragonja River. Above the village, whose name is associated with the Antique fort Castrum Bonae, is the Plešivica hamlet and the foothills below the village house the Hrvatini settlement and Kapeli in Škrline.
According to tradition, this place, which later became the site of the parish Church of St. Cosmas and St. Damian, used to be the site of an antique temple dedicated to Bona Dea, goddess of healing, fertility and maternity. This was supposedly the reason that the parish church was dedicated to saints Cosmas and Damian who were also saints of healing. The writings of the Bishop of Novigrad, Giacomo Fillipo Tommasini, led Prospero Petronio to claim that the name Castrum Bonae relates to the pagan goddess worshiped by the sick and the dying in their ignorance hoping that she would restore their lost health. As there was a sanctuary built in her honour in this place, the village received the name Castrum Bonae, later Costa bona or Koštabona. In 1028, the German Emperor Conrad II the Salian donated Koštabona to the Patriarchs of Aquileia and in 1211 it was enfeoffed to the Verzi family from Koper.
The village was walled in and fortified with a defence tower, as evident from the report by the Koper podesta and captain Francesco Mauro from 1558. In his Corografia Ecclesiastica from 1700, the Bishop of Koper, Paolo Naldini, says that Koštabona was a compact village with over thirty houses and that, with its defence tower, it resembles a hill fort. The defence tower was to protect the area in the event of war, but as reported by Naldini, it already showed the ravages of time. Naldini further said that the building that truly ennobled the village and made it famous was the birth house of the blessed deacon Elias, disciple of St. Hermagoras, apostle, patron of Koper and missionary in India. In the 19th century, the Koštabona cadastral municipality was part of the municipality of Pomjan and part of the Pomjan parish. The parish also provided elementary education. Due to the presence of the Italians and their influence, there was an Italian primary school in the village in 1912 or 1913. There are still three churches in the village.
The first and the largest used to be a pilgrimage church dedicated to Sts. Cosmas and Damian, patrons and martyrs of health, the second to the Blessed Elias and the third was the cemetery church of St. Andrew. There are numerous preserved holidays and customs in the village relating to these churches and their patrons and even today, these customs draw in numerous visitors from near and far.

Road from Kostabona to Koper

Kostabona with the Church of St. Cosmas and St. Damian

Information board - Trail of water sources

Old house with baladur on Placar

View back in the direction of arrival into Kostabona

Monument dedicated to the fallen in the National Liberation War

The cemetery Church of St. Andrew 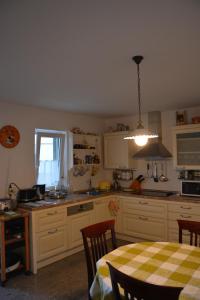 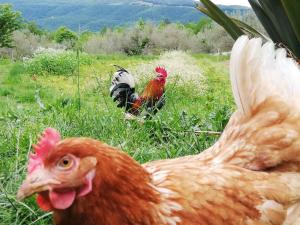 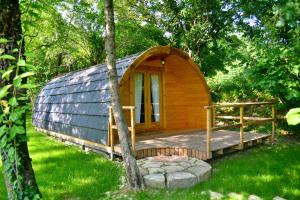