Despite its tourist development, Kranjska Gora has preserved the old layout of the village. Most of the old houses, farm buildings of the Carinthian type, were also modernized. In the old town center you can see the Church of the Assumption of Virgin Mary, the Liznjek House, the birthplace of Joseph Vandot and others. In the area of today's church there used to be another church called Mary on the White Pebble. Only the Romanesque bell tower, built of sand squares, was preserved from it. The Church of the Assumption of Virgin Mary was built in 1510 in the late Gothic style. The contractor was Jernej Firtaler from Villach. Carinthian influence is seen in the nave, which is decorated with a decorative interlacing of ribs and elephants on the inner supports. Two Gothic plastics date from the second half of the 15th century. The Liznjek house is over 300 years old. It was a rich farm, and for some time also an inn. The wooden house was built in the second half of the 17th century and the masonry chamber next to it was built in the 18th century. The house today houses an ethnographic museum collection and a permanent exhibition on the life of a young writer and official, Josip Vandot, author of popular Kekec stories. At his birthplace, Podbreg 27, there is a memorial plaque.

Start of the old town centre at square in front of the Tourist Informa...

Borovska cesta between Trg na Gorici and square in front of the Touris...

View in the direction of Trg na Gorici

Borovska cesta through the old part of Kranjska Gora

The Church of the Assumption of Virgin Mary

The Church of the Ass...

The Church of the Ass...

Road to the square in front of the Tourist In... 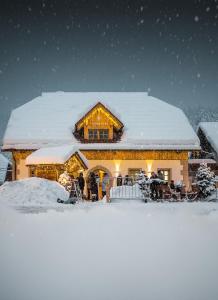 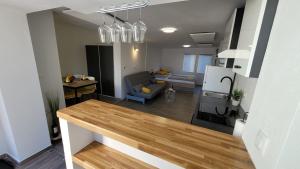 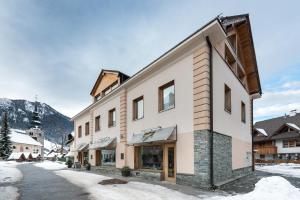