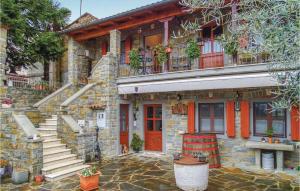 Amazing apartment in Smarje with WiFi

Krkavče is a clustered village on a narrow limestone belt on the edge of a flysch ridge where the village centre and the parish Church of St. Michael the Archangel developed. The villagge is comprised of the hamlets of Hrib, Abrami, Draga, Grič, Glavini, Mačkujek, Pršuti, Rov, Solne, Sv. Maver, Škrljevec and Žvabi.
Krkavče is one of the oldest villages in the Slovenian Istria, as attested by archaeological finds in Gradišče near Škrljevec, the site of the famous Krkavče Stone. Individual remains from the Roman era, the foundations of a sacral facility from the 9th century and an Old Slavonic burial place have been found near the cemetery above the village. The village was fortified during the time of the Patriarchs of Aquileia and Patriarch Wolfger donated the Krkavče fort and its territory to the Koper-based nobleman Gavardo in 1210. In the second half of the 13th century, the territory came under Venetian authority. In 1450, the Venetian Republic donated the Krkavče fort and the surrounding estates to the Vittori noble family from Koper. The villagers were in dispute with this family for almost two centuries however because of too high levies and breaking the laws applying to the Koper Commune. Quoting Prospero Petronio, the Bishop of Koper Paolo Naldini says in his Corografia Ecclesiastica from 1700 that Krkavče is not really a large village but that it does have quite a few houses, a substantial population and a rich source of crystal clear water springing in abundant quantities under the Krkavče hill fort.
Another excellent feature is the soil in Krkavče, which not only suits olive trees but also the wines known as teran, whose fruit is part of the daily menu of the noble houses. Even during the time of Venetian Republic, Krkavče was the seat of the parish, including Šmarje, Pomjan, Koštabona, Kaštel and Korte above Izola. The local population engaged in farming, animal husbandry and trade while the village saw a swifter economic, cultural and educational development in the 19th century. There was a primary school since 1823 and they began building a new school in 1854, so that in 1862 the village had a lower primary school with 62 pupils. At the end of the 19th century, Krkavče got an auxiliary school also attended by children from Sv. Peter and Nova vas. A small school for children from the entire parish was also built by the Krkavče dean and priest Ignacij Počivalnik. Immediately before the First World War, a subsidiary of the St. Cyril and Methodius Society for Istria emerged in the village with its own public library. With the formation of new municipalities, Krkavče became part of the Pomjan municipality and the Krkavče parish operated within the same framework. The use of Glagolitic undoubtedly left a special mark on the village.
The priests of Krkavče read the Holy Mass in Slavonic until 1866 and the rectory still keeps old Glagolitic documents from the 17th century. A tour of the village clearly shows characteristics of Istrian architecture. the Na vratih complex below the church, the two-storey Kuzmin house, the Pod voutom house etc.

Road by the former school

Village core with the Church of St. Michael

Church of St. Michael the Archangel 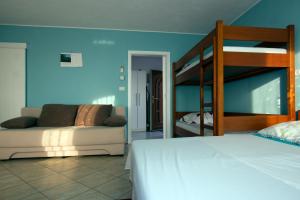 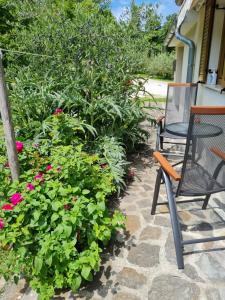 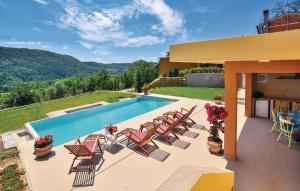 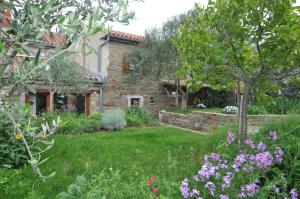