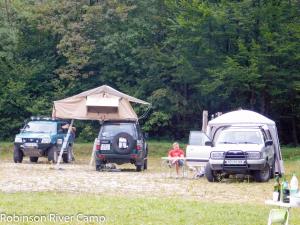 Most Beautiful Trips - Radovljica with neighbourhood

The parish church, dedicated to the 6th century Frankish abbot Saint Leonard, was erected in 1481 on the site where an older wooden church, first mentioned in written record in 1463, previously stood. The basic construction of the church and bell tower was renovated and enlarged many times throughout the growth and expansion of Kropa in the following centuries, primarily between the years 1694 and 1862. Among other features, the rectangular gothic style nave is original, as well as the two baroque chapels which were added a little later, while the inside is enriched with more recent paintings and sculptures. The interior of the Church of Saint Leonard, which features five alters, was painted by a number of Slovenian and foreign artists, the most important being Matevz Langus, Kropa born baroque painter Janez Krstnik Potocnik, Leopold Layer and his students, Matija Bradaska, as well as Ivana Kobilca and Henrika Langus. The wrough iron alter is the work of Kropa master artist blacksmiths Joze Bertoncilj and Joze Solar. The many stone and cast iron memorial plaques embedded in the church's facade are mostly in memory of various priests who served in Kropa. Another memorial plaque honours soldiers from Kropa who fell in the First World War.

Mazzoli House below the Church of St. Leonard

View of the Church of St. Leonard from Iron Forging Museum

Succursal Church of Our Lady of Kropa 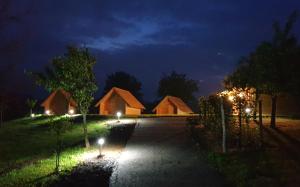 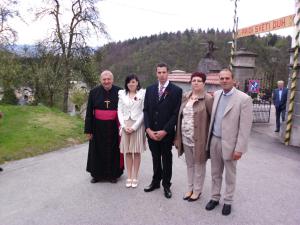 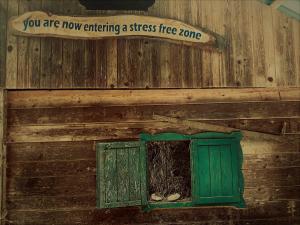