Lukovica and Moravce with neighbourhood

Most Beautiful Trips - Lukovica and Moravce with neighbourhood

Limbarska gora is a small settlement in the Municipality of Moravče, which is situated in the central part of Slovenia. The name was changed from Sveti Valentin to Limbarska gora in 1955. The local church, built on the top of the hill, is dedicated to Saint Valentine.
The Limbarska gora Mount has a large reputation among hikers and pilgrims for many centuries now, since it offers an amazing panoramic view and the pilgrimage destination of Saint Valentine's Church. Originally, Limbar Castle stood next to the pilgrimage church on Limbarska gora. According to the polymath Valvasor, the castle's name is derived from limbar, an archaic Slovene word for lily. The original church was erected around the year 1667. It soon became popular among pilgrims and was quickly too small for the needs of a growing congregation. Because of that was enlarged in the first half of the 18th century already. The building works were carried out under the supervision of Maček from Ljubljana, who achieved success with this Baroque architectural masterpiece. A rich treasury of art on Limbarska gora dates from the times of Saint Valentine's brotherhood, when there were huge gatherings of pilgrims here.
Today, people from wide still like to come to this beautiful place. A portico on the front side of the church gave shelter to many pilgrims and it was there that masses were celebrated at larger pilgrimage gatherings because the crowd could not fit in the church.

View back on the direction of arrival

Bench with a view

Road to Limbarska gora Mount from the other side

Chapel by the road 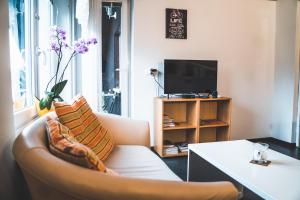 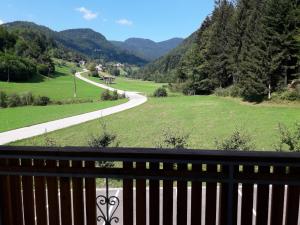