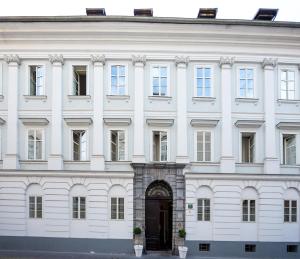 Antiq Palace - Small Luxury Hotels Of The Wo

Ljubljana is the largest town in Slovenia. It is very popular among tourists all the year. Vega Street is historically and archeologically interesting because of its position at the junction of the Roman and medieval cities.
It was built in the first half of the 19th century and runs along the former ditch, which was led along the outside of the walls of the medieval New Square. The walls are partly preserved and restored in front of the houses on the east side of Vega Street. Between the two world wars, the street was redeveloped by architect Joze Plecnik. According to his plans, it would be part of Green Avenue, which would connect the church of Trnovo with the present Liberation Square and end with the prophecies in Zvezda and the large southern square north of it. Therefore, he planted it on both sides with a tree-lined avenue, and in front of the houses on the east side of the road he arranged terraces on the restored remains of the old city walls. In the basement of the corner house in Vega Street 2, there was a restaurant called In Hell in Preseren times. It had beer rooms in the rebuilt ditch of the old emon wall and guests walked down the stairs, hence its name. The poet France Preseren was the permanent guest and for some time also a resident of this house. This is reminiscent of the poems Commandments and Goodbye, which the poet dedicated to his daughter. A little further, a mighty building of the former Realka, the first gymnasium in Ljubljana (Vega Street 4), stands opposite the university. It was built in 1874 according to the plans of the Viennese architect Alexander Bellon. In the adjoining building at Vega Street 5, the premises has a high school of music, founded by the Music Nation in 1882.
The facade of the music school is decorated with embossed portraits of Slovenian musicians, and in the park in front of the building, the Glasbena matica, on its sixtieth anniversary, has erected busts of ten composers who are the work of the sculptor Lojze Dolinar. The house Vega Street 8 used to be Obrez brewery.

Location of the former walls

Vega Street in the direction of Trg francoske revolucije Square

Start of Vega Street at the Trg francoske revolucije Square

Terrace with busts of university professors 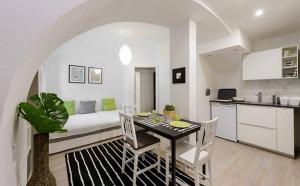 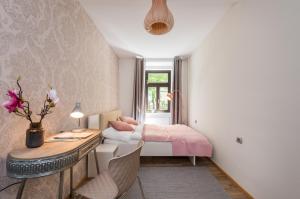 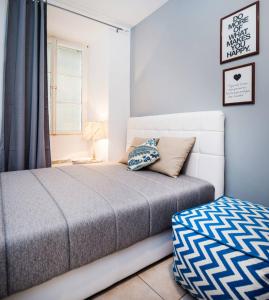 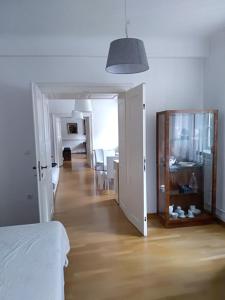