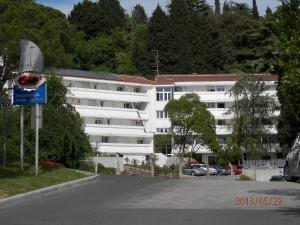 Piran is an old port town in Slovenian Istra. The town is bilingual, Italian and Slovenian. The Italian name for the city is Pirano. It is situated at the cape of the Piran peninsula. Piran has kept its medieval appearance with narrow streets and closely built houses, which gives it a typical Mediterranean character and a special charm.
On a hill above the houses, the church of Saint George is situated, with a high tower and an interior with many paintings and intricate artwork. Piran has been settled since before Roman times. In the years between 1909 and 1953, Piran was connected with Portorož and Lucija by an electric railway. Today, Piran is an administrative and tourist center which attracts both local and foreign visitors. Some of the most fascinating sites in Piran include the Tartini Square, the Town Palace, the Tartini Monument, the Tartini House, special stone columns for flags, the Court Palace, the May 1 Square, also known as the Old Square, and the old town wall composed of three walls from different time periods. In the city center is the Aquarium which was established in 1964. The Promenade extends along the coast and offers many restaurants with a wide variety of local foods and drinks. Church of Saint George offers an extraordinary view of the old town and the Gulf of Trieste. It was built in 1638 on the site of the Romanesque basilica and the Gothic three-nave church. A bell tower stands independently of the church. It was built in 1609 after the model of the bell tower of St. Mark in Venice. Tartini Square was originally a seafront for fishing boats. It was demolished in 1894. In the middle of the square stands a bronze monument to Giuseppe Tartini, a famous Piran countryman, composer, violinist and music educator. The Church of Our Lady of the Snows is located along Bolniska Street. It was built in 1404 and rebuilt in the baroque style in the 17th century. Opposite the church stands the church of Saint Franciscan monastery. The monastery cross corridor with a portal is a remarkable work from the 17th century.
Narrow streets in Piran make it impossible to drive cars, so there are parking places in front of the city. Piran, Seča and Portorož are connected by a regular local bus route. A newer part of the town developed outside the walls along the coast towards Portorož.

Tartini Monument and the belfry of St. George...

View of Piran through sailing boats in port

Piran surrounded by the sea

Beach below the Church of St. George 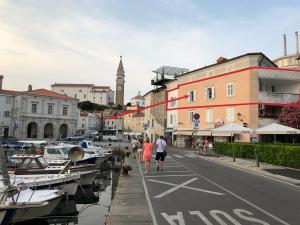 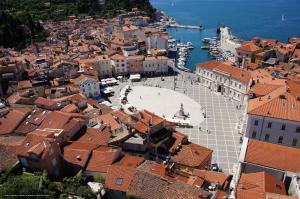 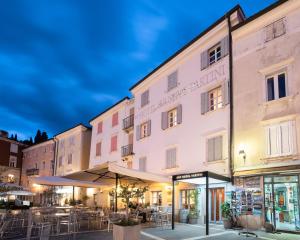 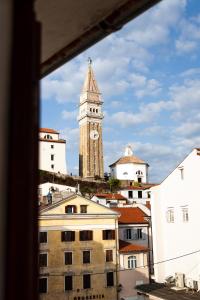