Piran is an old Mediterranean town, which is fully protected as a culural monument. It the past was mainly the city of salt workers, seamen and fishermen, but today many people live from tourism and shipping.
Town is an interesting integrity with preserved medieval Mediterranean look and powerful wall with valuable sacral and architectonic monuments. In Piran is also the Aquarium and the Maritime Museum. The coastal part to the Cape Madona is a lively promenade with many bars and restaurants. Piran is connected with the nearby Portoroz with a regular route.
Pusterla is an area, which is located in the coastal part towards Fiesa. In this part are wonderful views to the beach, to the Adriatic Sea and to the Church of St. George. The Cathedral of St. George is located above the serried old town core and gives the Piran a special character. The church was built in the XIV. century, but today's image got in the year 1637 after the Baroque renovation. The bell tower was added in the year 1608 and the baptistery in 1650. Inside the Church of St. George is very important the cathedral organ, which was made by Petar Nakić, the Franciscan from Dalmatia.

The way to the St. George's Church

Benches on the way with a view of Adriatic Sea

Arrival to the St. George's Church from Pusterla direction

View of the sea near Pusterla 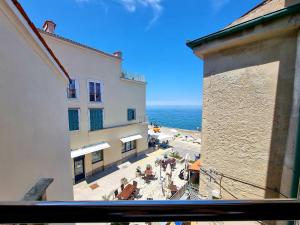 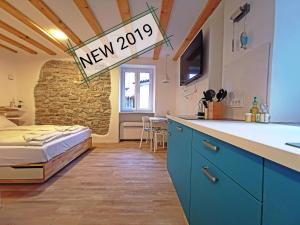 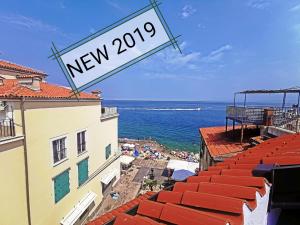