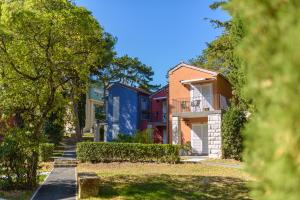 Bernardin is a well-known tourist resort located directly by the sea, along the popular promenade between Piran and Portoroz. Guests can enjoy the prestigious Grand Hotel Bernardin, Hotel Histrion or Hotel Vile Park.
The resort is spread over about 25 acres between palm trees, oleander, laurel and rosemary. Bernardin has a subtropical climate characterized by mild winters and not too hot summers. Rainfall is very low, there are many sunny days. The area has a rich historical past. The bay once housed the shelters of seafarers repairing fleets here. The Romans built a port near the present Bernardine. In the 15th century, a church and a monastery were built on the shelf of the hill and were dedicated to St. Bernard of Siena. The church dominated the salt pans, fertile olive groves and fishing grounds. The church structure was pointedly pointed, the bell tower was built in Venetian style. The monastery building contained workshops, bedrooms and cellulars. Monastery with the Church of Sv. Bernardin was dissolved in 1806 by the Austrian Monarchy. In 1839 the Austrian army turned the monastery into a fortress to defend the bay. Today, there is a bell tower standing about 26 meters high in this area. In 2002, the presbytery of the church and the outside of the bell tower were renovated and restored. In 1923, the Italians built a seaplane airport in the Bernardin area. It was blown up by the Germans in 1945. The bay also had a shipyard and a power station for the trolleybus. Today, Bernardin is a popular resort with hotels of different categories and price ranges. It began to get its current image in the mid-1990s. It is one of the most reputable providers of congress and hotel services in Slovenia and abroad.
Bernardin is the right choice for all generations looking for relaxation, rest and fun. There are available beautiful beaches, a covered marine park, Laguna Bernardin and many sport activities. Concerts and festivals take place on summer evenings.

View of Bernardin from Portoroz

Promenade along the sea at Bernardin

Support arches were built around 1750

Shopping street with shops, bars and restaurants in Bernardin

Stairs at the end of shopping street

Hotel Histrion near Portoroz at night

Pool Arcobaleno with whale on beach

Church of St. Bernardin in the upper part of ...

View of the vista platform

Olive tree in the evening 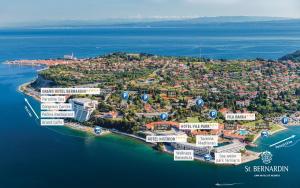 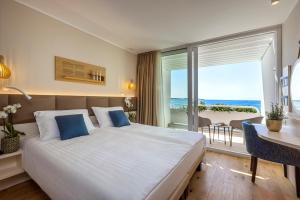 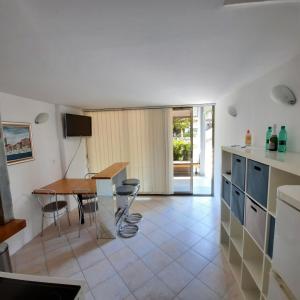 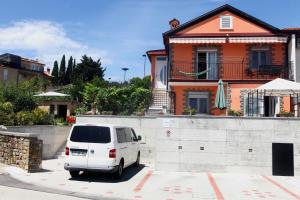