Radlje ob Dravi with neighbourhood have many natural and cultural sights that attract many domestic and foreign visitors. Among them are the town of Radlje ob Dravi, the Manor House Radlje with a park, the church of Saint Mihael, Calvary and the Hydroelectric power station Vuhred.
The town of Radlje ob Dravi lies between Maribor and Dravograd, right on the border with Austria. It is the administrative, industrial and commercial center of the central part of the Drava Valley. Radlje ob Dravi is surrounded on one side by the hills of Pohorje and on the other by the hills of Kozjak. The largest town sights are the Marenberg Dominican monastery, the town hall, the sign of Mary, the church of St. Mihael, Manor House Radlje, located in the middle of a beautiful English park, Rosenhof, old post office, old castle and more. The Marenberg Dominican Monastery is one of the most beautiful buildings in Radlje, located on the western edge of the town. The current building is baroque. The monastery Church of the Annunciation was demolished in 1782, when Joseph II. abolished the monastery.
Church of Saint Michael was first mentioned in written sources in 1251, when it was the seat of the Marenberg parish. The former building was made in the Romanesque style and from it to this day preserved only by the church nave. The bell tower and the presbytery date back to the second half of the 15th century. The presbytery has a star vault with ribs. A special feature of the church are the frescoes of Ana Samotreja and Mary the Protector with a mantle from 1523. The interior of the church is mostly from the 18th century. Church of St. Mihael was renovated in 1824, 1931 and 1992. Manor House Radlje is located in the middle of a beautiful English park in the western part of Radlje. When the old castle collapsed around 1700, it was rebuilt from the former castle annex into the Lower Castle.
The mansion is a single-storey building with the shape of the letter L. In the beautiful English park next to the manor, there are walking paths with benches, flowers are planted, and you can also see wooden sculptures. An interesting forest and historical educational trail leading to the old castle begins and ends at the Radlje manor. In the period before the Second World War, the portal of the Dominican monastery with the coat of arms of the prior of the monastery Marija Ivana Linzer and the coat of arms of Sigfrid of Marenberg were built into the building. Inside the Radlje Mansion there is a famous painting The Abduction of Europe. Calvary with the Cross was commissioned by the Dominican nuns. An important art monument is located on a rocky hill between the monastery and the mansion.
The Way of the Cross got its current image during the Baroque period in 1724 and consists of life-size plastics. The town hall was built in the first half of the 19th century and it is the building of a former town hall. Today it is also called the home of craftsmen, as it houses craft activities and shops. The building was renovated years ago. It is the most beautiful classicist building in the city. The Vuhred hydroelectric power plant is located on the Drava River. The hydroelectric power plant is managed by the company Dravske elektrarne Maribor. Its construction began in 1952 and was completed in 1958. The chain of power plants on the Drava River was built in the period from 1918 until 1978.
Vuhred plant is one of the first power plants in the former Yugoslavia, which was designed and built on the basis of domestic experience and equipped with its own equipment. In the refurbishment phase, which was completed in 2005, the replacement of equipment and turbines increased the flow and power of the plant.

Zmork's shrine near the manor house

Statue of Christ with crucifix

Park at the Manor House Radlje

Portal from the Dominican monastery 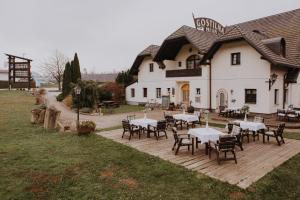 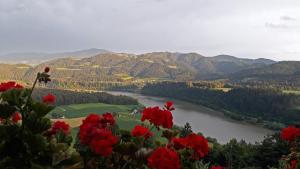 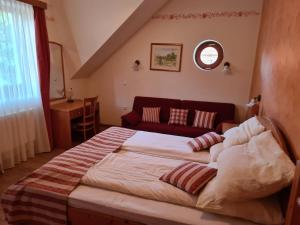