Most Beautiful Trips - Semic and Metlika with neighbourhood

Rosalnice is the village in the Metlika community. They are situated about 2 kilometres from from the city centre. Rosalnice are famous by three pilgrim Gothic churches, which are called Tri fare (Three parishes). They are all situated behind one wall, where is also the graveyard. Their history is not researched and much mysterious, because is not known how and when they were built. They originate from the second part of the 12th century. In village Rosalnice you can also see the typical rural inn, which represents the centre of the village and it is surrounded with the old lime trees. In this place was the primary seat of the Metlika parish, till the year 1461, when was transported to the city. Tri fare (Three parishes) with three churches so became only the three branches. They are the greatest art monuments and rare remainders of the Gothic architecture in Bela krajina. The northern church, which is also the biggest, is consecrated to Our lady of Sorrows. Inside you can see the oldest organs, which were made in former Kranjska and are the work of the famous organist Jozef Egartner from Kranj with images of the evangelists, apostles and scenes from the Old testament. The middle church is consecrated to the whipped Jesus. By the western side stands the belfry with the lean against open shed, so the people could be under the roof in the bad weather. The southern lower church is dedicated to Our Lady of Lourdes. It has the uncommon interior with Neo Gothic wooden altar. To external walls is in all three churches built in some tombstones from the last two centuries. Sometimes was in the nearness the parson's house, but it was burnt down between the Second World War. After the war was renovated and now is there the secular and fire house.

The Ecce Homo Church near entrance

The Church of Our Lady of Sorrows

The Church of Our Lady Of Lourdes 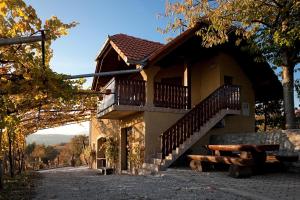