At an altitude of 1611 metres, the mountain pass at Vrsic is the highest in the eastern Julian Alps and provides a link between the Savska and the Soska valleys. We can have a relaxing cub of tea or even stay the night at the Ticarjev mountain hut, which is located at the top of the pass. There are five mountain huts on Vrsic offering refreshment and rest.
Just off the main road winding up Vrsic, at an altitude of around 1200 metres is located the Russian chapel. It is a Russian Orthodox memorial chapel which was built by Russian prisoners of war engaged in forced labor in the area during the First World War. During the war Kranjska Gora was an important cross – roads of military passages. When Italy declared war to Austria in May 1915, the connection with the front line on the river Soca was a strategic importance. In the years 1915 to 1916 Austrian military command engaged more than 10.000 Russian war prisoners to build the road from Kranjska Gora over the Mojstrovka (Vrsic) mountain pass to Trenta.
In March 1916 more than a hundred Russian prisoners and some Austrian guards were buried by an avalanche. Two burial grounds in the vicinity of the Erjavceva koca, the tomb and the Russian Chapel, built in 1917 by the surviving Russian prisoners in memory of their fellow soldiers, are the reminders of the tragic events.

Russian Chapel by the road from Kranjska Gora to Vrsic

Parking area near the Russian Chapel

Stars to the Russian Chapel

Russian Chapel in Vrsic - Information board

View back to the road

Path to the Russian Chapel

Russian Chapel and the tomb of the unknown Russian soldier

Russian Chapel by the road to Vrsic

Vault with the monument in the form of a pyramid with the label "To th...

Tomb of the unknown Russian soldier

Neighbourhood of the Russian Chapel

On this place was camp of the prisoners of war

Monument with the map of the Russian Road to Vrsic

World War I Military Cemeteries around 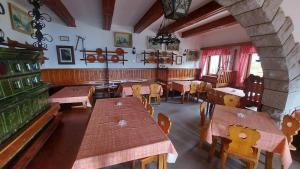