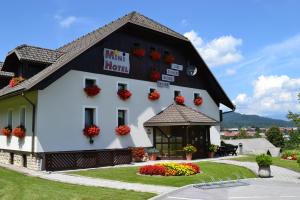 Pustal is suburban settlement in Skofja Loka. It is situated in right bank of Poljanscica. Pustal is accessible from the town over bridge Pustal and on foot by Kopaliska Street over wooden footbridge Hudiceva brv (Devil footbridge), in which is also a mark. River under footbridge Hudiceva brv is spuming and rapid. Worth seeing are also Pustal's castle, church saint Kriz on Hribec, Nace's house, Policar house and baths, which are rather neglected. Pustal's castle was built in the year 1220. In that castle lived family Pustal, which has extincted at the end of 16th century, followed by a lot of other owners. Castle's chapel has marvellous fresco »Snemanje s križa« of Quagli from the year 1706. Now are in former castle in the two-storeyed building with arcades yard, apartments. Up to baroque church of saint Kriz we come on walking passing 12 Stations of the Cross. On Policar's house is marked up to where was stretching water at the big flood in the year 1926. Nace's house is museum and monument of Slovenian cultural heritage. It is the example of old Slovenian home, which has preserved original external form and old interior equipment. History of this house extends in the beginning of 15th century.

Way of the Cross to the baroque church on Hribec

Way of the Cross

View of town from baroque church on Hribec 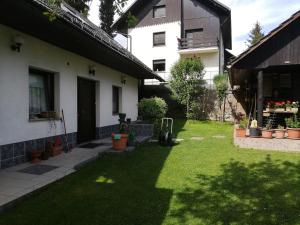