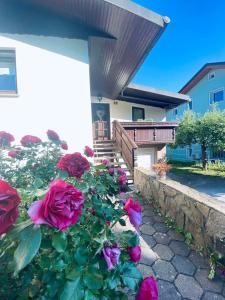 Rising 475m above the city of Krancelj on a prominence stands Loka Castle. It was built on the edge of a natural terrace and below the castle a settlement of merchants and tradesmen grew up. It was first mentioned in a document in 1202 which stated it to be a resistantial castle. The first castle was build by the Freising Bishops and was the seat of the Manager or Head. The bishop when he came to see his dominion also stayed here. When it was almost completely destroyed by an earthquake in 1511, Bishop Filip ordered it to be rebuilt. In the castle’s courtyard was a powerful tower whose foundations are still seen today. Today the castle is part of the Loka Museum where you can see the cultural, ethnological, historical, Artistric, natural and scientific wealth of the Skofja loka region. Near the castle is a place used for concerts and walks that are wonderful during the summer. Into the city we can come down on the way near good preserved city wall that protect city many centuries.

View of Loka Castle near entrance

Way to the Castle of Skofja Loka

Castle of Skofja Loka with tower

Trail from Mestni trg Square in Skofja Loka to the Castle of Skofja Lo...

Castle of Skofja Loka from below side

Loka Castle from below side

Coat-of-arms of Skofja Loka with the Black