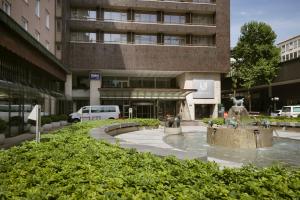 Trg Svobode (Liberty Square) is the place in Maribor, where something always is happening. There are many shows like parties, meetings, performances, fairs and many other. In the summer time you can enjoy under the sunshine, chating and coffee. In this part is the most powerful the bronze monument for the National Liberation War. It was made in the year 1975 and it is the work of the Slavko Tihec. In the ...

General Maister Square is named by the general Rudolf Maister (1874 – 1934), which was famous Slovenian poet, general and fighter for the northern border. Where the park and pavement part of the square meet a memorial was erected in the year 1987. At the memorial, which is the work of the sculptress Vlasta Zorko, was planted a linden tree on the occasion of the proclamation of Slovenia's independence in ...

Location of the last battle of the Pohorje battalion