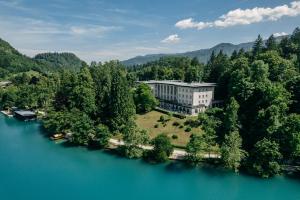 The Mala Zaka is situated not far away from the centre of Bled. It is in the bay at the northern part of the Lake Bled. The Mala Zaka is a popular bathing place, which in the summer time attracts lots of local people and tourists. You can lie at the meadow or at the asphalt bank with the wooden piers in the close nearness. In the nearness is also the parking place. The Mala Zaka is the sporting and tourist complex in which are also included the Hotel Zaka and the Rowing Centre. In the Hotel Zaka they have apartments, restaurant, coffee bar and four sandy tennis playgrounds. In the coffee bar they have lots of delicious refreshments. In the restaurant with the terrace are known by good food and Slovenian wines. They organize everything for weddings and other social meetings and seminars. In the Rowing Centre is the boathouse with the rowing boats. On the grassy area is the statue of the boatman, which was made by the sculptor Boris Kalin. It is one of his most beautiful works from the time between the First and the Second World War. From the Mala Zaka is the promenade in the direction to the centre of the Bled, which goes on Veslaska promenada or you can go in the other direction to the Velika Zaka. At Veslaska promenada you can see the interesting villa and enjoy in the view to the Lake Bled on many benches, which are just near the lake.

View of pier on Bled Lake

Pier with a view of Bled Island

Statue of boatman in Mala Zaka 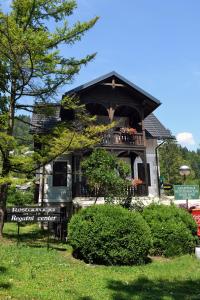 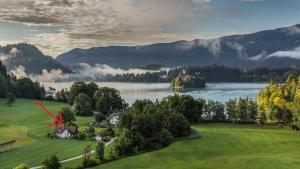 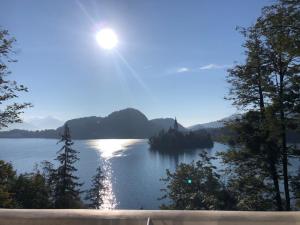