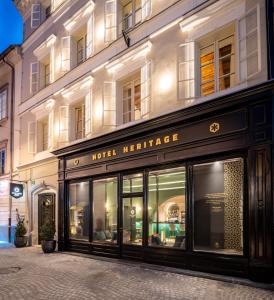 Ljubljana is an attractive city that attracts many local and foreign visitors. Major attractions include the magnificent Ljubljana Castle, the Town Hall, the Triple Bridge, PreSeren Square with the Preseren Monument and the spacious Tivoli Park.
Krek Square extends south of Vodnikov Square, outside the walled city. It is bounded on the east by an extension of Kopitarjeva ulica Street, on the south by City Hall. It lies beneath the picturesque castle hill with the famous Ljubljana Castle and tunnel below the Castle. The area of the square is home to attractions such as Peglezen building, a former hotel on Krek Square 10, the Bank building, City Hall, a fountain and a funicular. Peglezen is a picturesque multi-storey building located in a triangular area at the intersection of Kapiteljska Street and Poljanska Road on Poljanska Road 1. In the immediate vicinity are Kapitelj, Faculty of Law and Faculty of Theology in Ljubljana. The commercial-residential building with a wedge-shaped floor plan, adapted to a pointed and narrow plot, was built in 1934 according to the plans of architect Jože Plecnik. The object is named after the fact that it resembles an iron due to its triangular shape. The building had previously stood in the area but was badly damaged during the 1895 earthquake and had to be demolished. In the early 1930s, Plecnik made a plan to renovate the Vodnikov trg Square, and part of the renovation included a plan for a three-story building. The plan for the regulation of the market was not adopted, but the plan of the building was taken over by Matko Prelovsek, the head of the city construction office, who then ordered the construction of the building. The iron room has a ground floor and two floors. The design is vibrant and the floors are different.
In front of Peglezn's front is a tall wooden flagpole on a circular pedestal painted in tricolor colors. It was renovated in 1989. In 2009, Peglezen and the mast, as Plecnik's work, were proclaimed a cultural monument of local importance. 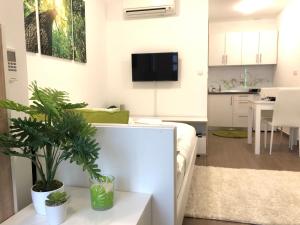 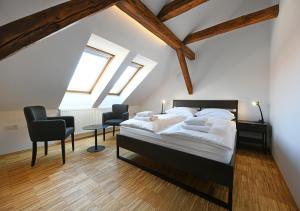 from 85 €
Ljubljana -
Modern center studio under the castle