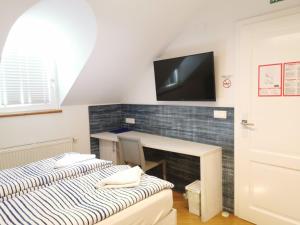 The Preseren Square is one of the most beautiful markets in Ljubljana, which is especially popular by Ljubljana residents. It is known for its red Franciscan church of the Annunciation, the beautiful Plecnik Bridge - the Triple Bridge and the Preseren Monument.
The market is lively, there are many bars and shops here. The market was first called the Animal Market, later it was named after the church Mary's Square, and then after the Slovenian poet France Preseren. It lies at the junction of the old medieval town with the new, which spread from the 19th century on the left bank of the Ljubljanica River. It is actually a crossroads, into which five streets converge, which then merge onto the bridge at the gateway to the old town. The space was interesting and important in the Middle Ages, because through it and then through the Spital City Gate, which stood at the beginning of the wooden bridge, the ancestor of the present Triple Bridge, flowed into the walled city most of the commercial traffic. Here in front of the city gates, a shop flourished in the 16th and 17th centuries. Merchants erected their stalls and huts in front of the gates and on the bridge until they were banished from there in the 19th century and built masonry storefronts in Copova Street, which have survived in part to this day.
Ever since, there was also a church on the square, which was originally Augustinian, and in the 18th century the Franciscans moved there from Vodnikov Square. By the end of the 18th century, when Preseren Square was demolished, the city walls were markedly suburban. Like most of the markets outside Ljubljana, it was regulated only in the first half of the 19th century. At that time they also paved it, and it started to look more urban. In the years 1841-42, they built a new stone bridge instead of the old one and named it after the brother of Emperor Ferdinand the Francis Bridge. The year can still be seen today above the vault of the middle bridge. The Preseren Square changed the most after the earthquake of 1895. At that time, they demolished the old house, which stood on the site of the present Presern monument, and built new, stylishly designed buildings, in height adapted to the crown of the Franciscan church.
During the two wars, the square was rebuilt again, at which time a new Mayer Palace was erected, the work of architect Stanko Rohrman, and two additional pedestrian bridges were built along the Franco Bridge - today's Tromostovje. Preseren Square is one of the most vibrant and attractive spots in Ljubljana.

Model of Ljubljana on Preseren Square

Preseren Square in the direction of Triple Bridge

Preseren Square and the Three Bridges

Preseren Square in the direction of Copova ulica

Church of the Annunciation

Preseren Square with the Central Pharmacy and Monument to France Prese...

Preseren Square in the direction of Miklosiceva cesta

Preseren Square with the neighbourhood 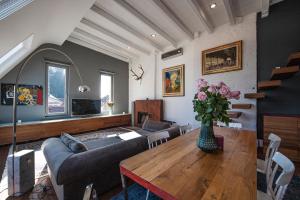