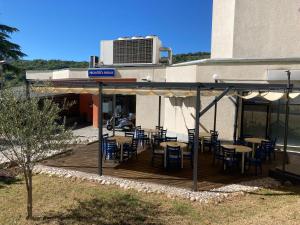 Preseren Square with the neighbourhood has the next interesting buildings: the fountain Da Ponte, the church of Saint Basso, the Cadamuro Palace and Muda Gate. The fountain Da Ponte was first mentioned in the year 1423. Sometimes Preseren Square was named Da Ponte Square. The water supply went from the mainland to the island already at the end of the 14 th century. In the year 1666 the old fountain was replaced with the today's, which is made out in the form of the bridge. The bridge symbolicly illustrates the name of the major da Ponte, who was responsible for its construction. The basin for the water is in the shape of the octagon. It is surrounded with the 15 pilasters, which have the signs of the aristocratics families, who gave the money for its construction. In the place where is now the church of the Saint Bassa was sometimes the asylum of the Saint Nazar from the 15th century, who was serving to poors and foreigners. In it was also the first hospital in the town. The church was remade in the year 1731. You can see the statue of the Saint Bassa. The town's Gate Muda has been and will remain the main continental city gate of Koper. The Muda Gate is the only intact preserved representation Renaissance gate in Slovenia. They are the one of the twelve gates who were once opening in the town's walls. The preserved triumphant leads through a wide covered area to the inner part of the city. It used to be a tollhouse station and through it had to pass all the visitors to the city who had arrived along the embankment from the land. At the gate you can see the symbolic lions' heads. Higher up is the personified sun, the symbol of the city.

Church of St. Basso in Koper

Muda Gate from the direction of Presernov trg

Remnants of the former city walls with a small arched door

Washbowl on the former city walls

Lapidary and small window on the former city walls

Muda Gate from the outside part of the former city walls

Remnants of the former city walls with a small arched door 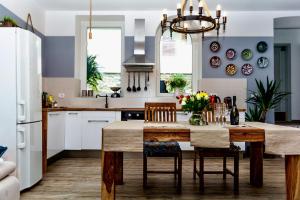 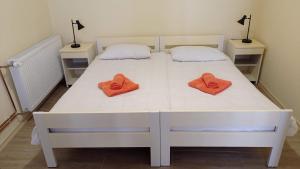 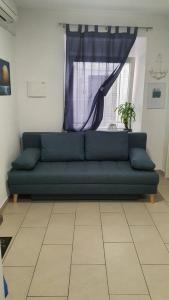